On Thanksgiving day, I planned to go for a short 172 mile road trip from Portland, to Trillium Lake on Mt. Hood, to Bridge of the Gods in Cascade Locks, and then back to Portland on Hwy 14 to explore the Washington side of the Gorge, stopping at any places along the way that looked good for photos. Once back in the city, I planned to meet up with a neighbor and then go out for Thanksgiving dinner at a local restaurant.

Cole and I got on the road around 10:00 AM and after grabbing a quick drive-through breakfast and filling up on gas, headed toward Mt. Hood on Hwy 26.  I was hoping to stop at Mirror Lake first but quickly realized that there were not any roads to the lake, only hiking trails. Since I wasn’t prepared for a winter hike, I continued on toward Trillium Lake.  The gate for the forest road was open and although it was a bit snowy, it seemed relatively safe.  As I headed down hill on the road, I soon came upon an SUV stopped in the middle of the narrow road, motioning for me to stop.  I did so and then sat there for a bit, not knowing what was going on up ahead beyond the curve in the road.  Since the guy ahead in the SUV wasn’t coming over to me to fill me in, I threw my car in park, turned off the engine and got out, leaving Cole in the car, and walked up ahead to see what was happening.

Once I got a little farther down the road, I saw that there was a car that had spun out on an icy curve at the bottom of the hill, blocking traffic.  Everyone appeared to be alright though and since there was nothing I could do to help, I turned around to head back to my car to wait for things to clear up.  As I walked back toward my car, I saw that my car was sliding down the road, toward another car that was backing up and me!  Fortunately, I was able to motion to the car backing up to get out of the way and my car gently slid off the road and stopped in some brush, getting hung up on a stump before going all the way over the edge and down a steep embankment.  I quickly ran over to check on Cole and get him out of the car.  I breathed a deep sigh of relief when I discovered he was perfectly fine, although clearly confused and a bit shaken.  I got him and my cell phone out of the car and luckily had enough signal on my phone to look up a tow truck company and call for help. 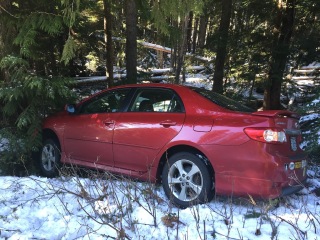 The person I spoke with on the phone said that someone had already called ahead of me and that a tow truck driver was on the way.  In the meantime, more cars began to arrive on the scene and quickly started to get stuck on the icy road when they had to also come to a stop on the hill.  Luckily, there was a woman among the group with a wonderful thing called “snow socks“.  She let all the stuck cars use them to get up the hill and had my car stayed put, I would have been one of those lucky people.  An hour later when Brian, the tow truck driver from Clackamas River Towing, showed up, there were only two cars to assist, me and the girl who had spun out down the hill causing all the chaos. 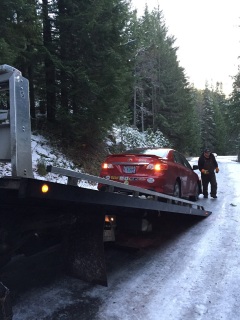 Brian proceeded to help get the car that had spun out up ahead, out of the way first since she had called for help first.  He offered for me and Cole to sit in the tow truck to keep warm and suggested I call my insurance company to see if I had roadside assistance on my policy and if so, he could simply direct-bill my insurance.  So, while he positioned the truck to tow the other car out, I navigated through a series of phone prompts and a couple different people at Allstate about my policy. Unfortunately, that’s when two more unfortunate things happened.  First, I discovered I did not have roadside assistance on my insurance plan and second, the tow truck winch was malfunctioning and Brian would not be able to get my car out without going back into town for a different truck.  He was able to hook up the first car to the tow truck and simply drag it up the hill while someone sat in there and steered.  After the first car was un-tethered at the top of the hill, I rode along with Brian back to the shop to get a different, fully functioning truck, to retrieve my car out of the ditch.

While in town, after switching vehicles, we made a quick stop for gatorade and snacks, which Brian treated me to as well seeing as my wallet was still in my car, and then headed back to the mountain to retrieve my car.  While loading up my car, some more cars began to arrive.  I stood on the roadside a bit farther up the road to try to alert traffic that the road was blocked up ahead but the first car to arrive had troubles stopping and proceeded to skid toward me on the ice, clearly out of control.  I quickly ran to the other side of the road to avoid being run over and the car proceeded to crash stop on top of a small boulder on the side of the road.  More cars quickly began to arrive behind that one and skidded to stops but were unable to turn around and get back up the hill due to the ice and were now stuck as well.

Once my car was pulled out of the embankment, we began to assess the damage.  The stump that I was thankful for keeping my car from going over the edge of the embankment also wreaked a little havoc while my car was being dragged out.  My front bumper was barely hanging on.  My radiator was hanging a little low.  My back bumper was also hanging on by a thread.   Uncertain on whether my car would be able to make the hour and fifteen minute drive back to Portland, I opted to file a claim on my insurance policy and have my car towed back to Portland for repairs.

Meanwhile, the other cars that had gotten stuck in both directions of us called the same local towing company that was helping me at the time.  Being a holiday, Brian was the only driver working that day, and his company was the only towing company for quite some distance who could help.  Not wanting everyone to have to wait two and a half hours in the cold on the side of a mountain with the sun quickly going down, I opted to forego the immediate ride back to Portland, and let him take my car to the top of the road, drop it off, and go back to get everyone else out, one by one.

While Cole and I hung out in the passenger seat of the truck, Brian went back one by one, rescuing all of the stranded drivers.  One of the last cars he pulled out gave him some fruit, snacks and a bottle of wine as a tip.  To show his appreciation for my patience, he offered the bottle of wine to me, which I graciously accepted after learning it was one of my favorite types of Riesling.  Once everyone was gone and safely back on the road, we loaded up my car onto the flatbed and headed back to Portland but not before stopping at his neighbors house along the way who had two plates of their Thanksgiving dinner wrapped up and waiting for us to eat.  I shared mine with Cole who seemed to appreciate the meal as much as Brian and I did. Once in Portland, we unloaded my car at the Toyota dealership and, not having a way home, Brian offered to drop me off at my apartment. Once home, I poured a big glass of bourbon and sat on the couch with Cole, thankful that he and I were both OK and reflected on the days events.

The next morning when I woke up, I had a voicemail from the dealership saying that they didn’t do auto body work and that they recommended another place, J&M Collision, where they send all of their body work to.  I called over to that body shop but there was no answer.  I called back to the dealership and they said they’d call over to the manager at J&M and have someone get in touch with me. Long story short, it turns out the body shop was closed that day but lucky for me, the manager came in special to get my paperwork going and get me a loaner car through Enterprise. Unfortunately though, all of Enterprise’s locations were sold out of cars because of the holiday weekend and they wouldn’t be able to get me a car until the following day, Saturday, at noon.  That wasn’t going to be helpful though in getting me to the Southern Oregon coast on Friday afternoon where I had a non-refundable room reserved for a two day, one night photography trip.

So, what did I learn from this latest misadventure?  First, don’t go driving down mountain roads in late November in Oregon without tire traction (chains, snow socks or something else).  Also, don’t get out of your car if you can help it.  Had I stayed put in my car, I would have been able to control it better when it started to slide down the road and likely would have avoided going off the road as far as it did.  Most importantly though, I saw how wonderful people can be in times of need.  People like the lady who was loaning out her snow socks to all the cars so they wouldn’t have to pay for a tow. The other woman who gave away the snacks and wine in appreciation of Brian’s help.  The auto body manager who came in on his day off to try to get me a loaner car so I could make my next trip to the coast. Brian’s neighbor who brought us Thanksgiving dinner in the truck. Maybe most inspiring though was Brian the tow truck driver.  For not only giving me, the customer, his wine tip for my patience while he helped out the other people who were stuck but mostly for his positive attitude through the whole seven hour ordeal, despite being hungry and missing spending the holiday with his three year old daughter, just to work on Thanksgiving, helping people in need avoid freezing to death on a side of a mountain. It wasn’t the Thanksgiving I was expecting but in the end, I think it was better than anything I could have ever planned.

For a fun little photographic and musical slideshow of my journey that day, check out this video: