I have officially been an Oregonian for one month now and it has been amazing.  I love Portland so much more than I thought I would.  It has been wonderful to explore and discover all the cool things that make this city special.  So far I’ve only ventured out a bit in my own neighborhood, North Tabor, downtown, the Pearl District and a little bit of the Hollywood District.  There are many more neighborhoods on my list though and in time, I will get to them all.  Here are a few things I’ve discovered so far. 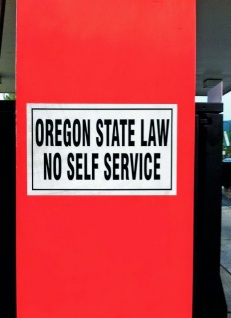 There is no self serve gas in Oregon.  Since I don’t drive much here, I mostly think this is a cool thing.  If you ask some other folks, you might get a different opinion.  Some say the service is too slow. Others might warn you that having someone else pump your gas may lead to easier drive offs with the nozzle still attached to your car.  When I asked around as to why this rule existed, I discovered it was initiated to create jobs but also cited was for safety and a host of other possible reasons.  There is a $500 fine for pumping your own gas so I guess it is best to let the professionals do it.

Plastic bags have been banned in the city of Portland.  Due to their lightweight consistency, they can act like balloons blowing out of garbage trucks and landfills. These flyaway bags litter parks and trees, enter storm drains and might eventually end up in rivers and oceans where they break into small, toxic pieces.  Plastics are one of the most common types of litter found in Portland’s rivers and on Oregon’s beaches. Sea animals often mistake plastic particles for food, causing harm to the animals. 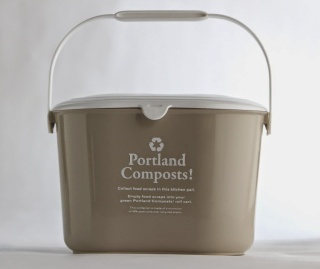 One of my first “that’s cool” observations about Portland were the composting containers provided to everyone in the city. Portland is ranked as one of the most green cities in the U.S.

It ain’t called “City of Roses” for nothing.  A quick Google Image search will show you what I mean.  You can find these beautiful flowers growing everywhere. 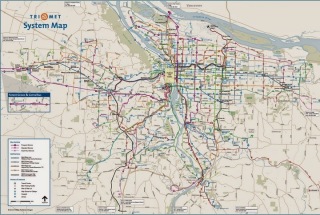 Public transportation will get you just about anywhere in the city.  Buses, light rail, commuter rail and street cars connect the metro area while also easing traffic congestion and reducing air pollution.  In addition to the TriMet system, there are also community car programs such as ZipCar and Car2Go.  Portland was also rated one of the most bike friendly cities in the U.S.  And of course you can also safely walk just about anywhere here too.

Portland is very dog friendly with lots of dog parks, dog friendly restaurants and pubs like the Tin Shed and Lucky Lab.  Also, many retail shops allow you to bring your dogs in with you.  Sometimes you can only do that if you carry them at all times but nonetheless, it’s a step up from what I’m used to in Wisconsin.

Parks, park and more parks!  Portland has parks everywhere.  There are at least 279 parks (that’s over 10,000 acres) throughout the city of Portland.  At 5,157 acres, Portland’s Forest Park is the largest urban forest in the United States. With more than 80 miles of trails, fire lanes and forest roads, Forest Park stretches for more than seven miles along the eastern slope of the Tualatin Mountains, overlooking Northwest Portland and the convergence of the Columbia and Willamette Rivers.

“Keep Portland Weird” is the motto here.  It is common to see some strange things everywhere and it definitely keeps things interesting.  I think this description I found online sums it up pretty well:

“Portland is like that kid you know, the one that most people don’t get, and therefor probably gets made fun of a lot. It’s that kid with the goofy rolling laugh who is probably wearing floral pajamas and hospital slippers in public. This kid is the absolute best, because no matter what, he is not trying to be anyone else but him (or her), and you gotta love that. Portland is that kid. Portland is genuine. And we’ve all got a little Portland inside, embrace the weird.” – Samuel McLaughlin

I saw my first art car while walking downtown on my lunch break the other week.  It was similar to this bus pictured above.  It was most unexpected and passed by as quickly as it came.  It was just one more of the oddities in this city. 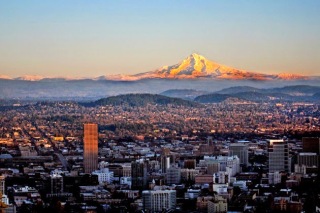 There is so much to do both in (and just outside) of Portland.  Head 90 minutes west and you will hit the coast.  Head east and within an hour or two you will hit the Columbia River Gorge and Mt Hood.  A few hours north and you’re in Seattle.  Within the city, there are a plethora of festivals, breweries, parks, shops, theaters and so, so, so much more.  Check out Visit Portland to see what I’m talking about.

Apparently my Wisconsin accent is strong because several people have pointed it out to me here.  It might be argued that Oregonians do not have an accent but I would like to note that they definitely have some strange pronunciations.  Case in point, Couch Street is pronounced “cooch” and the Willamette River is pronounced “will-am-it”.  Freeway signs direct to this place call The Dalles (which is a city in case you were wondering) and it’s pronounced “dales”.  Aloha is another city here and it’s pronounced “ah-lo-ah”.  And of course, Oregon is pronounced “Or-a-gen” not “Or-a-gon”. 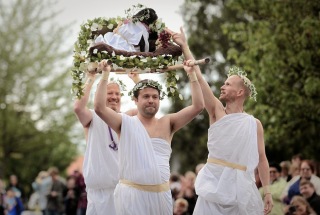 Portland loves pugs!  This is becoming more and more apparent as I venture out into the city with my pug, Cole.  My first inkling to this fact was at the Tin Shed the other weekend while waiting for a table.  Several dozen people walked by at one point or the other and I would say at least half of them stopped to gush about how much they loved pugs while they showered Cole with attention.  This weekend, in the Pearl District, it was almost comical how many people not only stopped to gush over him but also from a distance, you could feel the love as people smiled, pointed and watched intently as we made our way from shop to shop. 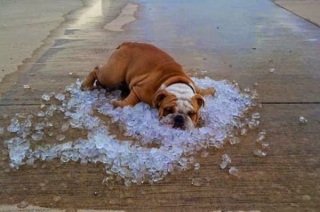 The majority of the year, Portland has very moderate temperatures (and yes, lots of rain and gray skies) but in the summer, the faucet in the sky turns off and the sun comes out.  High temperatures average in the low 80’s so not a lot of people have air conditioning in their homes.  Supposedly, Portland only gets a handful of 90+ degree weather, usually in August but so far, since I’ve been here, there have been weeks of high 80s+ weather.  The high temps peak between 3 and 7 pm so needless to say, it’s a little uncomfortable feeling at times.  I know I shouldn’t complain and perhaps after I get through my first rainy winter, I’ll truly appreciate the summer here.

So the saying here goes that “only tourists use umbrellas”. God forbid I be considered a “tourist” but you know what?  When it’s pouring rain, I’m going to opt for an umbrella. I can handle some drizzle and if I have nowhere to be, the soaked rat look is probably fine but that’s not the look I’m going for at work or at a nice restaurant.

I’m discovering that Portland is pretty lax on rules.  For instance, they throw a huge sign up at the Saturday market that says “no dogs allowed” but clearly, there are lots of people walking around with dogs.  The TriMet website states that pets (other than guide dogs) must be in a fully enclosed carrier while on the train or bus but regularly, you will see people bringing their dogs on the train.  It’s a little strange to navigate but I’m sure I’ll get the hang of it soon.

Portland has some fairly unique establishments and activities throughout the city,  For instance, Velo Cult is part bike shop/part bar.  There is an annual adult soap box derby coming up where 5,000 – 8,000 people will gather at Mt Tabor to watch teams coast down the course.  Winners receive awards for speed, engineering, art, crowd pleasure and several other categories. There’s also the H.P. Lovecraft Film Festival, World Naked Bike Ride, the Zombie Walk and more. 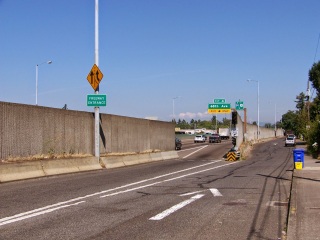 I did not know that one could actually live on a freeway on-ramp until I moved to Portland.  If you can get past the noise, it’s rather convenient to get to just about anywhere in the city especially since the 60th Avenue Max station is just one block away from me.

Portland has 8 markets to choose from around the city that provide such an amazing assortment of fresh produce, flowers, bakery and so, so much more!  So far, I have only visited he Hollywood Market but I can say with great confidence that no one should be buying produce anywhere in the city but from one of these markets.  You can check out the vendors here.

Portland has a proliferation of Food Carts and they seem to be growing in numbers and locations. Also known as lunch wagons, taco trucks or even snack shacks, they are truly a phenomenon in Portland. They set up in parking lots, sidewalks, and even parks.  Some in large groups and some solo.  In one day you could enjoy a bowl of traditional goulash, have a coffee and pastry for a snack, and then take home a giant Indian combo box for dinner. 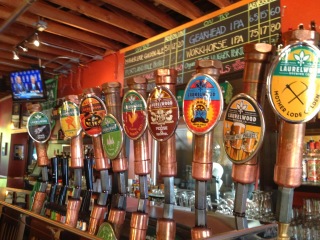 Portland has an amazing number of breweries, distilleries and wineries to choose from.  For those who can handle all that goodness, it’s a paradise!  For those that can’t, there are over 500 AA meetings each week to choose from.

Portland is the 5th most tattooed city in America and it is apparent everywhere you go.  In just about every part of town you will see folks with not just one, but usually upwards of several tattoos.  It’s good for my tattoo-sporting skin to blend in so well with this city.

The photos in this post are all borrowed, to see my original photos, please visit my Flickr page here.